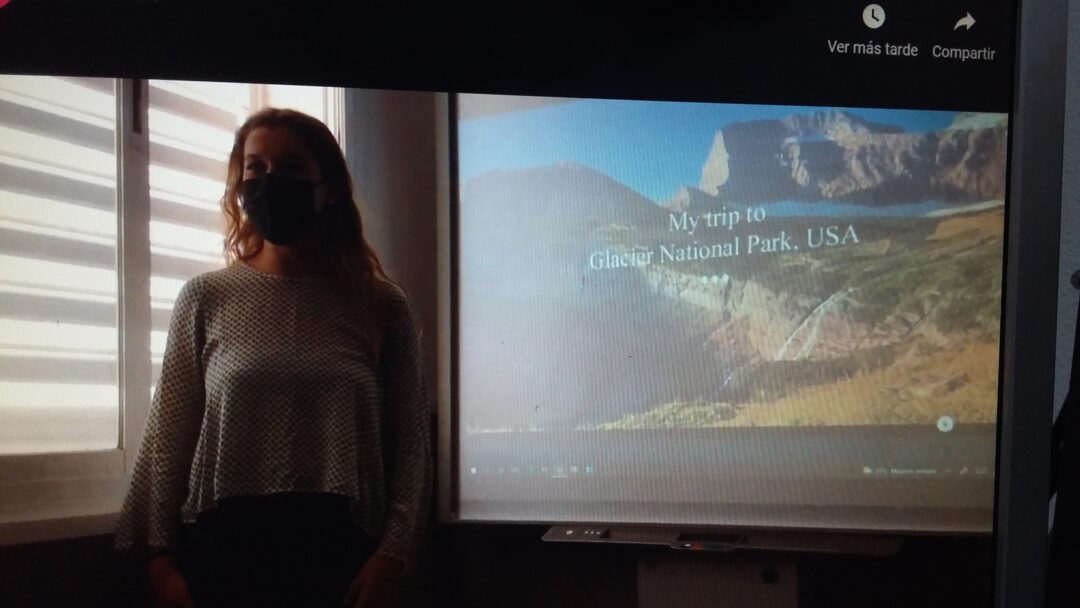 She went to the Glacier National Park with my dad at the end of August in 2021. The travelled from Nashville, Tennessee to the National Park in Montana. They made the drive in 3 days taking turns driving.

She went to the Glacier National Park with my dad at the end of August in 2021. The travelled from Nashville, Tennessee to the National Park in Montana. They made the drive in 3 days taking turns driving. The drive took 29 hours total. Our car was completely packed full of food, camping gear and hiking supplies.

HIKES THAT SHE DID

They were in the park for five days. They did four day hikes. They all are between 12-14 miles long (19.3- 22. 5 km). My friend Nick works at the park and he helped us plan what hikes to do. They mostly camped where they were there and it was cold at night so they had to bundle up to stay warm. They cooked their food on a camp stove or over a bonfire.

The first hike they did was along a lake called Bowman lake. It rained a bit that morning but cleared up by the afternoon for the hike back.

The next hike they did started in a valley, went up over a ridgeline and then decended into another valley on the other side of the mountain. It is called Siyeh Pass and it was very windy and cold at the top of the mountain.

On the third day they did a hike that did not have an established trail. Instead they followed a goat path up a mountain to an alpine lake over a ridge and down to a glacier lake. There is a picture of her and her dad in the glacier lake.

Their last hike was her favourite started before the sunrise because it is a popular hike and they wanted to get to the top before the others hikers. It was called Grinnell Glaciar. It was one of the last remaining glaciars in the park. Originally there were about a hundred twenty-five glaciers and today about twenty-five remain.

2.SOME WILDLIFE SHE SAW ON HER TRIP

When they were hiking up they saw some mountain goats that were blocking the trail. She showed us a picture of Grinnell Glaciar and its water is very cold. They could actually hike underneath the glaciar.

She took a picture of her and mountain goats and another picture of a grizzly bear and a bighorn sheep.

On their way home they left Glaciar National Park and drove to Nasville. They did another hike to an alpine lake in the Grand Tetons National Park in Wyoming. The final part of the hike is nearly vertical so you have to climb with your hands and feet but the view at the top is worth it. After their hike in the Tetons they drove to Custer State Park in South Dakota. It has interesting rock formations and a beautiful lake called Jenny Lake.

Their last stop on the road trip was at Badlands National Park in south Dakota. Here you can find dinosaur remains and the landforms are really unique. You can see all the layers of the earth. By the end of the trip they were completely exhausted and covered in dirt but they had a great time!

She explained she saw mountain goats, a grizzly brown bear and a big horn sheep. Her favourite place is Grinnel Glacier. There are a lot of waterfalls. You can also go underneath the glaciar.

She sumarises her trip from Nasville to Montana. Her dad and her drove 29 hours. She got tired of the trip. She stayed 2 or 3 days in a hotel but mostly she did camping.

It took 11 days all the trip at the end of August. It was still warm in Tennessee but in the north it was cold. They cooked a lot of pasta. One night they ate tacos and sandwiches.

She really loves hiking. But she doesn’t like flat trails or around the lakes. They were beautiful but not very exciting. Her favourite was the one she did very early in the morning so they were the first hikers to get to the top. In Montana there are a lot of grizzly bears and they have to be careful.