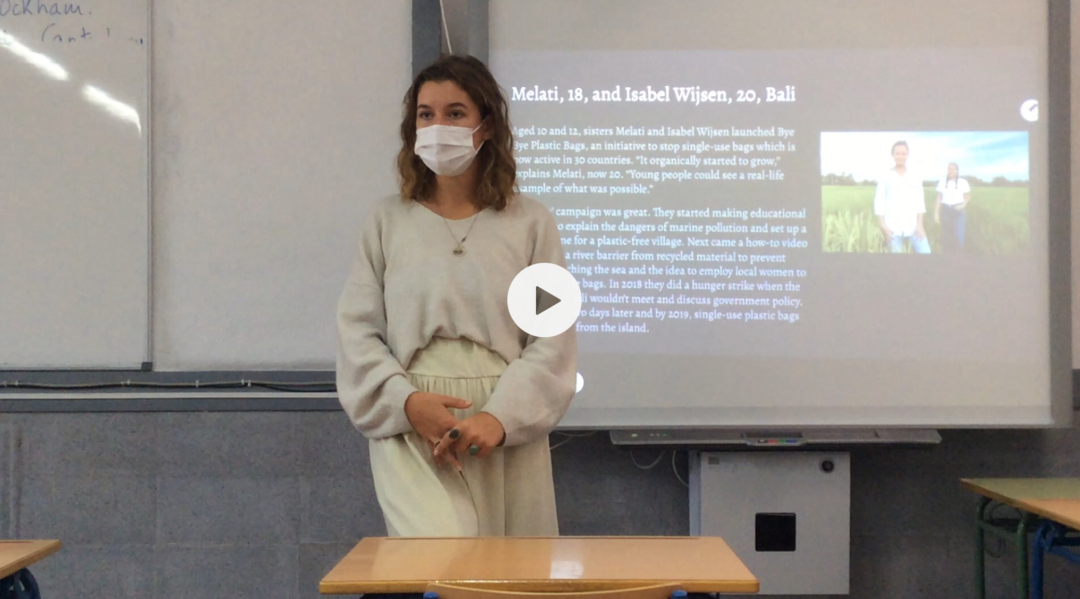 1. This presentation showed some of the faces of the youth environmental movement. Lia talked about problems such as overconsumption, the products that people use and the clothes they wear. She told the students how young people take action now around the world and what they did. Students came up with ideas of their own.

Aged 10 and 12, sisters Melati and Isabel launched Bye Bye Plastic Bags, an initiative to stop single use-bags which is now active in 30 countries.

They starting making educational booklets to explain the dangers of marine pollution and set up a pilot scheme for a plastic-free village. Next came a video on making a river barrier from recycled material to prevent rubbish reaching the sea. By 2019 single-use plastic bags were banned from the island.

It was while kayaking around the coast of West Cork, where he grew up, that he became aware- microplastics pervading the water around him.

Aged 15, he designed his own spectrometer to measure the amount of microplastics in local water. By adding magnetite to oil, he discovered that he could attract the microplastics in a sample of water and remove the vast majority of them with a magnet.

Now the chemistry undergrad has created his own startup, Fionn and Co, to build a prototype device that can filter more than 90% of microplastics from tap water. He hopes to expand the technology to work in wastewater treatment plants and even at the mouths of rivers.

He founded Teach the Future campaign with one main goal: to reconstruct the entire education system around the climate crisis and ecological emergency. He thinks schools are failing to prepare students for the climate emergency. He argues that most young people want to understand more about climate change and how to survive it.

5.Joe’s demands in Teach the Future

-A review commissioned by the government

-All new educational buildings to be net-zero

For years twice a day Aadya walked past a scrapyard in her neighbourhood of south Mumbai on her way to and from school. It originally meant to be a garden of the local police station. It had become an overgrown and full of waste. When she was 15, in her summer holidays, decided to do something about it. She asked them for three weeks to let her clean it up.

With help of local residents she replanted it with native Indian plants and trees. The idea came from Joshi’s reading on the Miyawaki method of afforestation. It said that planting the right trees can have a significant impact on restoring insect and animal biodiversity. The results were immediate: monkesys now hang out at the police station, and butterflies and birds have made the garden their home.

When he was 7 he created a bank for school friends in his home town to have money to buy books, stationery and uniforms. Nine years later the bank has 6700 clients, all aged 18. As well as saving, children can earn money by bringing plastic and paper to recycle at school drop-offs. The money is automatically credited to their bank accounts. Every month, the bank recycles between 15 and 16 tonnes of paper and plastic through local companies.

The idea came when he saw children begging at traffic lights and wondered how he could help them and their families earn and save, as well as recycle household rubbish that would otherwise become litter or go into landfill.

The biggest environmental issues cannot be tackled on an individual level (for example turning off lights and recycling). Things must change on a large scale with industry and government and you have to work together to problem solve. So let’s think big. Here are some of the environmental challenges Spain struggles with:

9.Environmental problems in Spain I

-Desertification- 36% of the country is threatened by desertification with the Canaries and the south-east being the worst hit. Though a part of this degradation is due to climate change, natural processes, the loss of soil fertility of irrigated land by salinization, erosion overgrazing, fire and human mismanagement.

-The Almeria region of southern Spain was once a typical rural agricultural area, satellite images from 1974 show. The latest image shows how an area of 20000 acres has been transformed into a vast glass-house for producing greenhouse crops.

-Deforestation- Extensive forests of Spain have been destroyed over the years due to unplanned cutting, forest fires, and poor farming practices.

-Air pollution- Acid rain, the destruction of the Ozone layer and the greenhouse effect are all consequences of the air pollution problem that Spain faces.

-Quality and quantity of water worldwide- Industrial and agricultural waste contributes to Spain’s water pollution problem, as well as oil rankers that travel to the nation’s shores. The Mediterranean Sea is polluted due to dumping of effluents and raw sewage from oil and gas production offshore.

10. QUEST 1: What company would you create to help the environment?

I would love to. I don’t ihink on the top of my head a company that I would create. That is why we need to sit down and talk about ideas about creating something together. I would make an effort in doing reforestation and replanting islands to bring indigenous people. Or I would like to join an existing group.

I have never seen anything like it. I am sure there are some issues but not like this. Where I live it is not an agricultural area, mostly in United States there is a lot of grain like corn in big plains but there in not food. It is mostly in California because the climate is very similar to here. There are no so many greenhouses. They have only trees.

12. QUEST 3: What do you do to change non environmental-friendly habits?

It is a good question. Things that you need to change but it is very difficult to change them. It is a challenge and ultimately is about deciding what is best. It is a give-take and there is no perfect way to be environmentally friendly. There are some things like electric cars if you want to fix transportation. But when you are trying to find a good solution there are always consequences. They use oblivion batteries and it is terrible for the environment. So the things that we need to use electric cars that are supposed to be good for the environment are extremely harmful. To win something you lose something. You are trying to do as best as you can.

13. QUEST 4: What is the environmental situation in the area where you live?

I think mostly there used to be a lack of awareness more than anything. It is hard to see where I live. I don’t live in a coastal city so there’re not usually big storms.  There are no desserts, so we don’t experience droughts. We see pollution but it is more permitted so they tend to ignore it. People don’t take action because it doesn’t affect them immediately but eventually it will. It is nice not to think about it because it is scary. You don’t have to think about it every day, which is unfortunate.

The plans I would do to take action on things that happen on my face. If I see trash I pick it up and put it in my bag, take it with me and throw it away when I do hiking. Or try my best to recycle everything that I can. I clean the plastic and glass before recycling in the containers. I buy the least as possible not creating more waste. You just do the best you can.