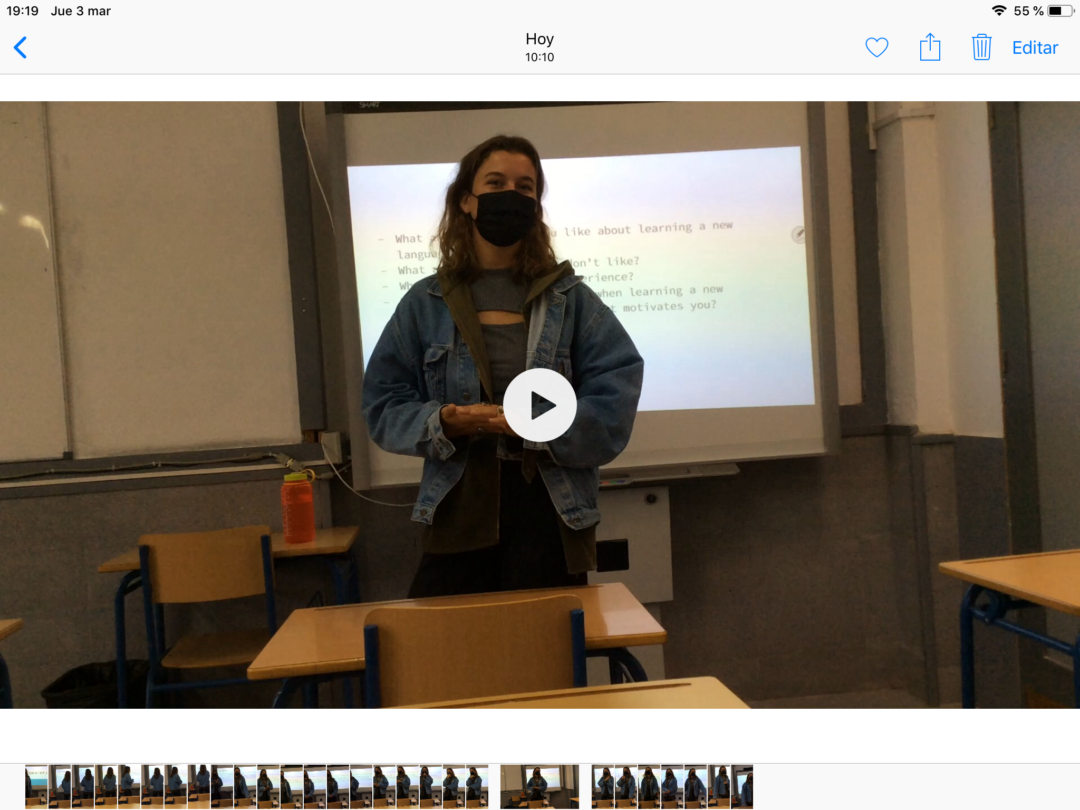 Lia makes a presentation about the advantages of learning a new language, the importance of future jobs and the abilities which are developed when acquiring a second language.

A foreign  language is a whole new system of rules and structures. Learning a new language  means your brain has to deal with complexity as it tries to figure out new patterns. When our brain try to communicate in a new way, we develop important learning skills such as cognitive thinking and problem-solving.

The more the brain is used, the better it works. A new language requires familiarity with vocabulary and rules, and also being able to remember and use this knowledge. Learning a language gives your memory a good work out. This means that multilingual people have brains that are more exercised and quick to remember names, directions and facts.

3. It enhances the ability to multi-task.

Multi-tasking is very stressful for those who are not used to it or don’t do it very well. People who are multilingual and good at changing from one language to another have practiced this very demanding work for the brain. People who have developed the ability to think in different languages and move from one to the other become much better multi-taskers reducing stress levels.

4. It sharpens the mind

A study from Spain revealed that multi-lingual people are better at observing their surroundings. They easily spot anything that is irrelevant or deceptive. Thery are also better at spotting misleading information.

5. It keeps the mind sharper for longer

6. The first language is improved

Learning a new language makes you more conscious of your own language. It also makes you a better listener as you are used to having to interpret meaning and judge nuances.

7. It improves performance in other academic areas

As a result of higher cognitive skills, studies show that the benefits of learning a new language include higher scores on exams in Math, Reading comprehension and vocabulary by multilingual students compared to the scores of monolingual students. Language skills boost your ability to do well in problema solving tasks in general.

Opening up to a cultura allows you to be more flexible and appreciative of other people’s opinions and actions. As a result, if you are multilingual, you have the advantage of seeing the world from different perspectives which makes you better at communicating.

Set goals: it helps to have short term and long term language goals to encourage your learning.

Learn common vocabulary and use repetition.

Find a style that works for you (flash cards, apps, immersive learning)

Connect with a native speaker

QUESTION 1: Which is the easiest language to learn?

I don’t think I know. I heard for English speakers Spanish is the easiest to learn but I am trying to practice all these suggestions and I am not sure of that. I am sure there are other languages like French or Italian that are easier for Spanish speakers.

QUESTION 2: What is your favourite language?

QUESTION 3: What language would you like to learn in the future?

I really want to learn Spanish because I am trying so hard. I need to try harder. But I really like to learn French as well. If I could learn Italian it would be so cool. But first Spanish, then French and later Italian. I don’t know, I’ll see.

QUESTION 4: What is the best way to learn a new language?

For me learning to speak with Spanish friends. I learn Spanglish asking the meaning of words. Also listening to Spanish people talking in English , they help me understand the way they translate the language with mistakes help me learn their words and structures.

QUESTION 5: Have you learnt another language in the school?

I wish I had. You guys are so lucky that you could learn at an early age. In United States it is not very common to study a language from Primary School like in Spain. I’ve studied Spanish for one year in High School and it is not enough to learn a language. I wish I had been more interested in languages when I was younger so that I was doing on my own. I didn’t think about it when I was younger.

QUESTION 6: Are you thinking about visiting France so you can learn French or are you going to stay here to learn more about Spanish and its culture?

I have been studying French for two years and then I went to study abroad in France. But it was before the COVID. I was just starting practising my conversation skills down in French and I was sent home because of the pandemic.So I didn’t get to practise as much French as I wanted to. It was only two months. And then when I came to Spain I was speaking in French thinking that I was speaking in Spanish so my pronunciation was messed up. So I would like to stay here till October. I am hoping to get Spanish at least in a good level and then start French.

QUESTION 7: When you went to High School what other subjects could you study?

About the languages? Or others?

We had Spanish, French and Latin. That was it. And I studied Latin for one semester because my mother made me. She said that it would help with languages in general but I didn’t like Latin very much.So I learnt Spanish.

QUESTION 8: What do you like about learning a new language?

I like it because I have the possibility to travel around the world and understand movies and series.

Absolutely. Do you study French too? No? Do you like English?

QUESTION 9: What are the things you don’t like about learning a new language?

Maybe at the beginning when you don’t understand everything so I try to learn more.

How did you learn? What did you do to learn?

To keep their level I watch movies and listen to music.

Did you just listen or study the lyrics?

I sometimes read the lyrics when I was curious. I am asking you because it would help me when I am learning Spanish.