OUR TEACHING ASSISTANT LIA IS HERE 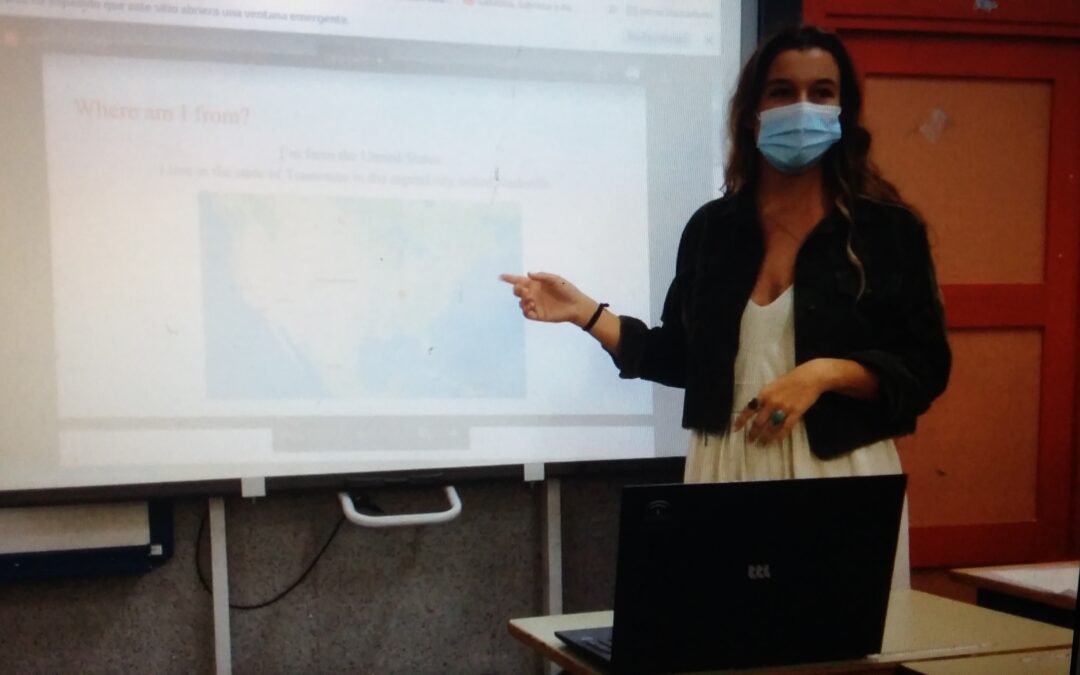 On the 18th of October our teaching assistant Lia arrived from Tennessee and she did a wonderful and detailed presentation of herself, her family and her city.

She is going to tell you a few things of herself and then you can ask her questions. She is from the United States. She lives in a state called Tennessee in the capital city of Nashville, which is in the south of USA.

Nashville is mainly important for its music. Its nickname is music city USA. It is known by its country music. Nashville has two very famous buildings: the Batman building and the Parthenon. The popular food in Nasville is spicy chiken.

She has an older brother called Adam who is 25 years old and a younger sister named Bella who is 19 years old. Her brother’s wife is going to have a baby in about a month, so she is going to be an aunt very soon. She is really excited about that. Her parents’ names are Emilia and Joe. They all live in Nashville.

She went to Missouri university. It is 7 hours away from Nashville. She studied Photo Journalism and Environmental Science . She graduated in December 2020.

In her free time she likes reading mostly fiction books. She really enjoys rock climbing, painting and drawing. She loves to travel and she loves to hike and photography. She brought her climbing equipment: shoes and luggage.

She wants to work in sustainability to help prevent climate change.

2.HER EXPLANATION OF HER PRESENTATION

She is from the United States. She lives in a state called Tennessee in the capital city of Nashville, which is in the south of USA.

Nashville is mainly important for its music. Musicians play guitars and banjos there. Nashville has two very famous buildings: the Batman building and the Parthenon.

She has an older brother called Adam who is 25 years old and a younger sister named Bella who is 19 years old. He is very tall and played basketball in college. Her brother’s wife is going to have a baby in about a month.

Her parents’ names are Emilia and Joe. They all live in Nashville. There is a picture of all of us in Canada on vacation.

She went to Missouri university. It is 7 hours away from Nashville. She studied Photo Journalism which is telling a story through photographs. She also studied Environmental Science which is Science about nature. She studied water, soil and environmental restoration. It means how to take care of the planet we have and protect it from harm. She graduated in December 2020.

She likes painting and drawing. She does a lot of realistic art using charcoal pencils. She loves travelling and that’s why she teaches English in Spain. She enjoys hiking and there is a picture of her hiking with one of her friends in the north of USA. She loves photography and keeps photos and tells a story.

In the future she wants to work in sustainability. Her major in the university is environment and she wants to help protect the Earth from us and help heal damage that’s already been made. That might be planting trees or working in oceans

Hummus and falafels are made of chickpeas, zucchini, lemon and cilantro. She hasn’t made her own falafel but it’s a kind of meatball. In her taco she loves green peppers, cheese, advocado, lettuce and salsa. She put all in a tortilla.

She played volleyball in High School but she doesn’t play anymore. Last week she played it in the beach. My favourite sport to watch is basketball. She watched her brother play.

She has a pet dog named Ginger. She has had her since she was very little so she is getting very old now. She has a pet cat as well and she calls her Kitty.

She listened to a bit of everything but her favourite music is Indie, independent folk-rock music.

She doesn’t like rugby. They have American football (also called soccer) and rugby. It’s very slow and she doesn’t understand the rules. It is very popular in United States.

Her brother is 2 hundred centimetres and he plays on college.

Her favourite book is Pride and Prejudice by Jane Austen. She really likes fiction books and focused on feminism. Her favourite film is The little mermaid and About time. She likes happy movies and she dislikes scary movies.

Her favourite subject in the school was art and literature. She had to read books and talk about them. She loves broccoli. She likes swimming for fun but not for exercise. It is exhausting. She likes swimming in the ocean. She lives in Zapillo in Almeria and she loves to run in the afternoon and goes swimming after that to cool off. It is refreshing. She is 22 years old and she was born in May 19, 1999. She loves dogs but not cats. She thinks they are mean.

She hasn’t had bunnies and she thinks they are better than cats. She would have nightmares if she watches scary movies. She loves dogs and there are so many where she lives. She doesn’t eat eggs either.

She loves potatoes and peppers. She loves spicy potatoes. She prefers McDonalds. She is surprised you guys know all those restaurants. She loves sour candy. She prefers coca-cola. She doesn’t watch football. She likes fiction books and books about feminism.

She doesn’t have a favourite basketball player. She likes potatoe chips. She has never taught English before. She teaches Science and English classes at the school. Her hobbies are painting outside and hiking. She hasn’t been on one horse before. She speaks a bit of Spanish and French.

She wants to stop climate change but she doesn’t have a plan. She likes Mexico and its pretty nice beaches.